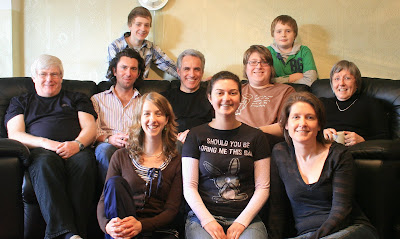 I realise it has been a long time since my last posting. Life has taken on a different focus with the church plant we are now involved with. Lots has been happening. My son Ben is almost at the end of his university course, my wife Annie has been at her new school for over a year and Jenny, our daughter, is in Miracle Bible College, Cape Town for at least one year. On top of that we are planting a new church out of our home which is giving us great joy.

The church began to meet on 6th September 2009. Five of us had been meeting for quite a few months on a Wednesday to study the Bible together. God had spoken to me at a meeting in South Africa in September 2008 that we should plant a church. I admit to being reluctant but knew it needed to happen. One night at the bible study I was challenged by my daughter to start it and so we agreed on the date, 6th September 2009 as the first meeting.

At the first meeting there were eight of us, but two were visiting. From the first note on the guitar the worship flowed. This was one of the things that concerned me. What if we can't flow in worship? We believe in God giving us the words and music in the same way David worshipped. In the six months since we began we have only sung two 'known songs' so I needn't have worried.

The next test was the fact that I was away for the next three services. I told George, one of our members who plays guitar, that he must continue in prophetic worship in my absence. He rose to the challenge and has been the one to lead worship for most of the last six months.

In the first six months we have had two regular additions to the Body. Mary is a student at one of the local universities and is from Lebanon. She is proving to be such a delight. Our other addition is Stuart, he is a fine musician and worship leader and has taken on this role in recent weeks. He flows accurately in worship and we are entering another level. We thank God and believe others with be added.

One aspect of the church I really like is the participation and input everyone gives. I think all have prophesied at one point and those who have visited us have gone away greatly encouraged by words given to them. The corporate nature also effects the worship with not only the worship leader bringing the song of the Lord but the whole Body adding to that. It is exciting and effortless to worship this way.

We have had several visitors and are expecting others. Duncan and Beverly Curry are family friends who have recently obeyed the call to go to South Africa for training. They were leading a church in Yorkshire until the end of February this year. They join us whenever they can and are part of us. We will be sending them out next month.

Our first outside speaker was Morné Van Wijk. Morné is from Cape Town and was visiting the UK on business. He spoke to the church and attended a couple of meetings. His impact has been felt since and has brought an impartation to us all.

I do most of the speaking and we've covered a lot of subjects. At the moment we are studying 'Submission'. The feedback has been very good from a subject most preachers never preach. My son Ben has also shared as well as my wife Ann. We look forward to hearing from others in the Body as well.

From February we have begun to meet during the week and have a Household on a Tuesday and Bible Cell on Thursdays. The Household meeting is a led by someone different each week who leads a discussion on what has been taught the previous Sunday. It gives an opportunity to find out if people have understood and makes room for questions. We have had some great times and it is rapidly becoming my favourite meeting.

The testimonies of people with us are fresh and regular. If you'd like to read Katie's testimony go to this link: click here

Last Sunday Duncan and Beverly were with us. Duncan has just had a cataract operation. We decided we would obey the scripture, 'when one member suffers we all suffer'. The following photograph depicts that. As you can see Church is fun. 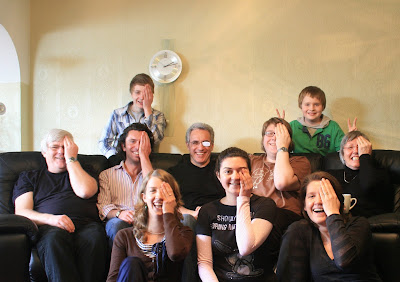 Posted by Poverty to Prophet at Wednesday, March 24, 2010