Have a nice day!!

Bunsworth and I arrived in the US yesterday on our way to a 'Prophetic Gathering' that I am speaking at. Had a bit of an adventure with baggage. We flew from Birmingham via Frankfurt to Denver. Landed two hours before our internal flight to Portland, Oregon. We thought that we would be in plenty of time and so weren't bothered. All the instructions for what to do in Denver Airport were clear and we were even shown an animated video of the procedure which was Immigration - Baggage reclaim - Customs.

Immigration was okay, just a long queue. Still we cleared in plenty of time and even got a few jokes out of the Immigration officer.

So on to baggage reclaim. My bag came up after a wait but no bag for Bunsworth! We managed to find someone who vaguely looked in charge who looked on her list and confirmed that it was not on the plane. What to do? 'Make a claim when you are in Portland or the bag will come here and take ages to get to Portland..Have a nice day'

So we set off for Frontier Airlines which was as far away from where we landed as you could get and found another enormous queue. Time by now was becoming a premium. Managed to get to the front check-in desk. We'd gone to separate ones to speed things up. Bunsworth was checked in but I was told I was too late! After some pitiful pleas they managed to get me on but said run or miss it. The parting words were.. ' Your bag may not get on the flight sir and you'll have to pick it up at the airport when it does because it is your fault... have a nice day!'

Now the dash began, back in the same direction we'd come from when we landed to a gate almost next to the one we arrived at. All went well then we hit security!! Off with the shoes, out with the laptop, Bunsworth had to lose the belt as well so more delays.
We just made it but true to form my baggage didn't.

We were met in Portland by Pastor Richard Sharpe who helped us sort out what to do about the bags. This meant a trip back to the airport for me today and hopefully Bunsworth's bag will be there. Retrieved my bag but not Bunsworth's. Then we are told it may take up to a week because it didn't clear customs!!! 'Have a nice day!!'

So had lunch and then went to Walmart's and bought Bunsworth a whole new wardrobe. So for him at least it turned out to be a nice day.

Just to prove we are in America take a look at the mag on sale.. 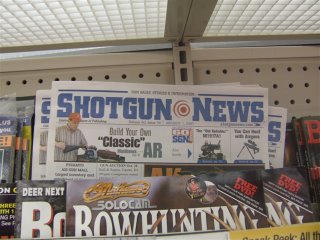 I am off to Portland, Oregon soon with my beloved, longsuffering son, AKA Bunsworth in blogging circles. I was told to 'Go to Portland' by an Apostle which may seem strange to some but I am learning to listen to these kind of guys.

We leave on 27th December and given that Portland is 8 hours behind us that means the journey door to door will be 21 hours. It would have been shorter but I couldn't get a decent flight. (Maybe now that Robbie and Rudolph are not busy I could cadge a lift from them)

We will be there for a week and so will experience the delights of a US New Year. Hope it's good. Being a Northerner New Year celebrations have always been special. I used to love it as a kid: getting to stay up until the early hours eating Lancashire hot pot and having a large piece of coal in the grate that was lit just before midnight that burned into the New Year. Then there was first footing when people would go house to house to let in the New Year and get a drink at each home.

I've been told that Times Square, New York celebrations are the official New Year for the US but that many states west of New York also celebrate a second time when their time zone reaches midnight. Maybe this means I can have three New Years, one at 4PM (UK), one at 8PM (New York) then one at Portland Midnight. If you have alcohol to welcome in the New Year that will be interesting.

We don't get back until the 4th so hopefully we get a day at least shopping. The meetings I take part in are from 28th to 30th December then we will be in the church for New Year's Eve meetings and I assume New Years Day will be a holiday. Mrs P is staying at home so I need to think of a good present to bring back. Any good shopping tips will be most welcome.

On a different note and as a proud Dad I thought you might like a photo of my beautiful daughter with a couple of her friends at last nights 'Ignite' Christmas meal. 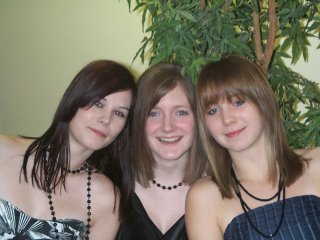 Jenny is the one in the middle! Oh to be sweet 16 again (no thanks)

Finally a photo of our good friends John and Joyce who celebrated their 50th wedding anniversary last weekend.. 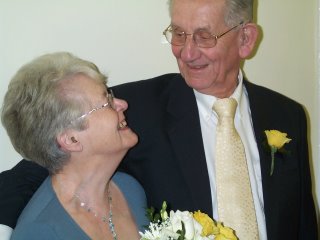 Blue Christmas Without Him

My number one Christmas choice to help Santa with his sleigh is my snorting friend Elvis the Porker!!! 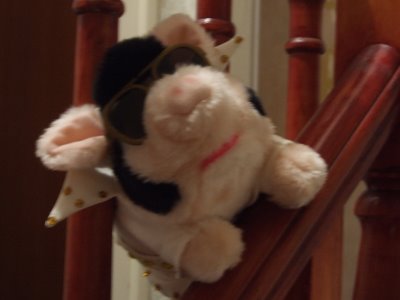 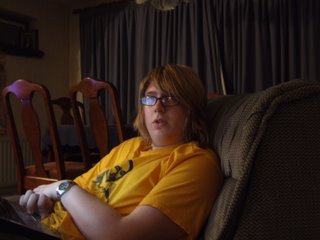