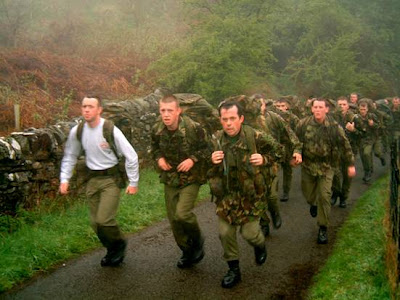 One word has been running around in my brain for the past couple of weeks and that is the word, 'endure'. It seems that is not a popular concept these days. If you look at advertising you will see that most products are quick fixes, or have a 'get want you want today' message attached. I can't help thinking that a lot of the economic problems that we are currently seeing have something of a 'have it today' rather than 'save and wait' thought behind them.

I confess that I have also in the past fallen into the trap of buy today and afford it tomorrow. When I gave up my job to give God room to do what He wanted with my time that had to go. I no longer had the big salary so had to think long term if we needed to buy things.

This past week Mrs P got a new job which she starts in January. She has been in her present role in teaching at the same school since 1992. She has endured a lot. The school was badly run at one point and got into trouble with the inspectors. A new Head arrived and had to make many unpleasant changes. Many of the teachers left, they took sideways moves to get out of the stress of change. My wife decided to endure. She made the adjustments and learnt from it how to be a better teacher. She gained a role in Senior Management and now after being there 16 years has gained a Deputy Head position at a different school. She endured, counted the cost and learned how to be better. Her reward was promotion.

Endurance is about going through things rather than round them. To put up with things for a season. I find God is a long term planner and along the way He expects us to endure hardships and suffer trials which produce in us something that can't be produced any other way.

Jesus gave some solid advice in Matthew 6:28 to 34

“So why do you worry about clothing? Consider the lilies of the field, how they grow: they neither toil nor spin; and yet I say to you that even Solomon in all his glory was not arrayed like one of these. Now if God so clothes the grass of the field, which today is, and tomorrow is thrown into the oven, will He not much more clothe you, O you of little faith? “Therefore do not worry, saying, ‘What shall we eat?’ or ‘What shall we drink?’ or ‘What shall we wear?’ For after all these things the Gentiles seek. For your heavenly Father knows that you need all these things. But seek first the kingdom of God and His righteousness, and all these things shall be added to you. Therefore do not worry about tomorrow, for tomorrow will worry about its own things. Sufficient for the day is its own trouble.

In the prayer we call the Lord's Prayer, He talks about daily bread. Literally that means, 'today's bread'. So He was saying we should ask for today's bread today.

It is hard to remain focused on today's issues. We do need to plan but all we can do is plan in preparation for tomorrow. If we began to think too much about tomorrow we get anxious and worry sets in. Mrs P and I try and ask God for today things as much as we can. That way if things come that we need to face today we do it knowing God is in it somewhere. It may call for endurance rather than asking for a 'quick solution'.

Today's issues are sufficient. When we suffer we need to endure it. Its not easy and is against most of the thinking of today. I am getting to the age where I have been through one or two recessions. I remember in the 1970's interest rates of 15% for mortgages and inflation running at a high of 26%! I recall not being able to get a job when I left the ministry in the 1980's because unemployment was several million. If we learn to endure then we will come out the other side different.

God promises us the basic needs for today: food, clothes and drink. I can trust God for a day's provision at least.

Paul exhorts Timothy in his apostolic letter, 'Endure hardship with us like a good soldier of Christ Jesus' (2 Timothy 2:3)

We are in a fight as Christians. We are opposed by the god if this world. We though, have overcome by the blood of the lamb and we can stand against those things that come against us.

Endure hardship, it has its own rewards.
Posted by Poverty to Prophet at Friday, October 17, 2008 No comments: