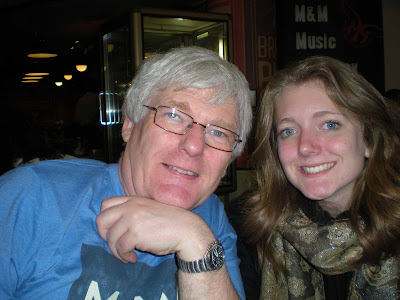 The past couple of weeks have been filled with incredible acts of kindness. On Friday 7th May I was sat in the evening enjoying a night in with my wife. As we relaxed I received an SMS from a friend in Cape Town. It read something like this: 'André wants you here for conference, ticket paid, when can you come?' At first it didn't sink in. I was all geared up for our trip in July / August and resigned to the fact that that would be the next time I saw my daughter Jenny. It took about half an hour and the arrangements were in place, I was booked on a plane from Birmingham via Amsterdam the following Monday.

As I winged my way over Africa I was so excited and hoped that the trip would be kept from Jenny so I could surprise her. I was almost the first off the plane as it landed and my lift from the airport indicated that it was probable that she didn't know. As we pulled into the drive at Apostle André's house I was a little nervous. It was after 10:30 and I thought Jenny might already be in bed. It turned out that she was the one answering the door. Her face immediately told me she didn't know. At first it was total incredulity, 'is this my dad, can't be he's in England, but it is' She melted into my arms and dissolved in tears. It was the start of a great week with her. She is so happy and I am so privileged to have been able to see it.

Next day I was visited by the other two Brits in the Church, Duncan and Beverley. It was great to see them and even after just three weeks it was obvious they were benefiting from their time there. Lots of catching up.

The week was so blessed. I feel at home in the church there. I received a message from one of the church members on my return: "just having you here at church is heart-warming, like an older brother who left the nest to build his family, and comes home for holidays to visit." That's how it feels.

I had mixed feelings as I left. Wanted to stay longer but knew that things needed doing here.

My return was scheduled for Monday 17th on the 23:55 plane to Amsterdam but the ash cloud meant it was delayed until 6 the next morning. More time with Jenny at least. The delay meant I would not be able to make my connecting flight to Birmingham and the earliest alernative was a day later which meant a stay over in Holland.

This is where other old friendships came to the rescue. I have known my friend Anita since school, she is one of my prayer supporters and we regularly visited her and her family in Holland during the 1990's. Business and different journeys meant I had not seen her since 2003. Annie arranged for me to stay there and I wondered if it may feel a little awkward. I needn't have worried. I was made so welcome and felt so at home. It was a great bonus to see them.

I finally got back to be met at the airport by my best friend on earth, my wife. She is truly amazing. I am so blessed, all of this friendship offered freely.

It reminded me of the scripture from Proverbs about a 'friend who sticks closer than a brother'. His name is Jesus. Such a faithful friend.

Thank you God for your blessings, for friends and loved ones who are a gift from you.
Posted by Poverty to Prophet at Friday, May 21, 2010 No comments: