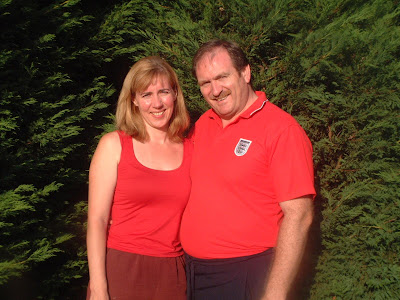 This weekend was a time of meeting up with friends we haven't seen for a while. They are missionaries in France and God has allowed us to work together over the past few years. Some of you will know Wayne and Wendy and their work in St Etienne. It was great to remind ourselves of what we found together and what in each other makes the friendship important.

It brought excitement to us all, especially my daughter who was thrilled to meet them again. We planned a meal for other mutual friends so invited Wayne and Wendy to join us. Nine for dinner, my wife excelled herself. It was good to catch up and enjoy the witty banter that always occurs whenever Wayne and I get together.

I remember a few years ago joining Friends Reunited. Its a social network on the Internet that allows you add details about yourself, your school, workplace etc. As other people list their details you discover people you haven't seen for years. It was this that fired my curiosity to seek out my best friend from school, Stephen. We were really close for most of Grammar school until he left and I continued into Sixth Form. I eventually tracked him down and rang him. It was almost thirty years since I had spoken to him. A little while later I was on a business trip and stayed in the area where he lived. We arranged to meet in a local pub for a drink and to catch up. I remember being really excited and full of expectation. The person who greeted me was not what I expected, I was still thinking in terms of a thirty year old image of him. In walked someone in his late forties, balding and much heavier than the stick insect he used to be. It was at that point that I realised I too had changed. Grey hair, also no longer wafer thin as I was in those days, and a lifetime of events that had resulted in who I am now. As we talked, things like familiar mannerisms and expressions brought recollections of what it was like back then. It was a great time of catching up but I quickly realised that that was all it was going to be, a past schoolboy friendship. We send Christmas cards and that's about it.

I learned that Godly friendships have a divine purpose to them. They run to a divine drumbeat. Sometimes there is intensity and at other times they are just keeping time. These kind of friendships are led by God in their direction and even after many months apart you can pick up where you left off without missing a beat. That's what it was like with Wayne and Wendy.

Jesus wants us to enter into friendship with Him but there is a price. True friendship costs. It can be inconvenient as well as pleasant. True friendship is serving the other and seeking their best. Out of that heart true friends bring precious wounds at times but it is worth it.
Posted by Poverty to Prophet at Monday, September 22, 2008