I agreed to attend a meeting in a small village outside of Alloa in Scotland on Thursday so decided to make some plans to travel up via my daughters near Wigan.

I hadn't see them all since May due to my being away in South Africa and France for most of the time since.

When I went with Mrs P in May my new grandson was only a few weeks old and Eloise was two the next day. I played hide and seek and exhausted myself trying to get under the bed.

I noticed a subtle change this time. Eloise is still sweet and lovely but there is an edge of defiance and a wanting to hurt that has crept in. Several times I had to firmly say no to her attempts to pinch and scratch. I began to think about this and asked myself what was happening.

I realised that what I was seeing was human nature and the development of things that the Bible calls sin. 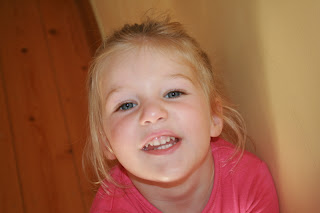 Not that Eloise is a great sinner but the nature of man is to rebel against God and this can be seen in the way a two year starts to show this. It fascinated me that without anyone showing her these things are happening naturally.

What has God done about this. He has sent the solution and remedy in His own Son Jesus. A verse in the bible in 2 Corinthians 5:18 tells us God is reconciling us to Himself through Jesus Christ and giving us the ministry of reconciliation.

I am guilty of sometimes looking at today's parenting skills and complaining but I realise that what we see in society today is more than unruliness. Malachi, ends the Old Testament by saying that there needs to be a turning of hearts, from fathers to sons and sons to fathers. He calls them the sons of disobedience. He then says 'lest I strike the land with a curse'. Is this what we are seeing around us a curse in the generation that we live in?

God's answer is reconciliation. First towards Him as our Father, learning to respond in the security of His love to His correction; then to each other to turn our hearts to one another for those kind of relationships that bring the same love and correction. Maybe we should be looking for these kinds of relationships in life.
Posted by Poverty to Prophet at Saturday, September 08, 2007

Good to see you both today!! Our Alan was so belligerent when he was between two and four that he must have had original sin by the bucket load!!!!!

INcidentally, you didn't enlarge on WHY you couldn't get under the bed!

The Spirit of Reconciliation is such an important ingredient in our walk of faith. Instilling that in our children is (imo), an essential element that presses on the door to forgiveness... not to simply forgive, but be reconciled - one to another - with bowels of mercy and kindness.
silentmornings.blogspot.com