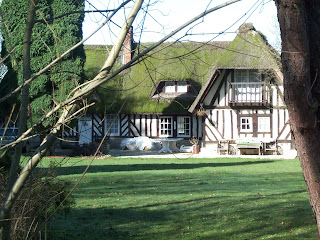 I took Mrs P to France last week for a lovely restful time in a beautiful Normandy B and B owned by a couple of Christians I met last year. It is in the middle of beautiful countryside not far from the port of Honfleur.

France is fast becoming a second home to me. I visited France for the first time in September 1974, just before the start of my second year at Bible College. I went with my best mate with a view to sightseeing and also to give out tracts and other christian literature. We spent most of the time in Paris, camping in a two man tent in the Bois de Boulogne, literally next to the river Seine. It was at this time that I fell in love with the country. Paris is a magical city and is one of my favourite places. Spiritually, however, France is one of the darkest countries. Secularism rules.

The weeks holiday was a half-term treat for us. We had not been away together since the summer. We visited several friends, one of who was getting engaged. (See photo) 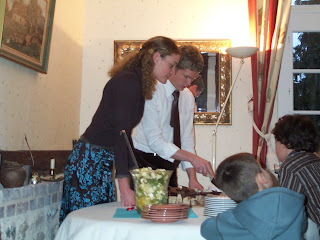 We spent the day with her and her family, a farming family, and were amazed at the different foods that seemed to just appear as we sat around and chatted.

I also got into conversation with her dad who decided to spend half an hour chatting with me in French! My brain was fried by the end but I did manage to get quite a bit out of him about farming in France and what he actually did as a farmer. He was good with his hand gestures which helped.

We also spent quite a bit of time praying with individuals. They know me as the visiting prophet from the UK so people will ask for ministry. It is such a privilege to see the hunger in many of them. There are not many churches in France that are lively and many Christians will travel over an hour to a service. They are desperate for God and their faith is simple and effective. We learn a great deal from just being with them.

Mrs P and I had a great time, we visited a museum, had great meals and great conversations and know that for us France is a special place. In April we are leading three teams to St Etienne on prayer mission and I know that those who go will never be the same again. It may be a dark place but it is a hungry place and has people of faith who are passionate in their love for God.
Posted by Poverty to Prophet at Friday, February 23, 2007

Good to hear you have had a nice time and break.

Missing you at Sutton.