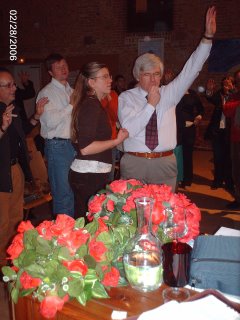 God saves the best until last many times and my last evening in the Evangelique Protestante Baptist D'Honfleur was no exception.

I spoke on the need to be intimate with the Father so we can then agree with what he wnats in our lives in prayer and then we will see it happen.

I felt so free to speak and the translator did a brilliant job allowing me to flow freely. It is always a little awkward when you speak through a translator and I haven't done it too much but it can be fun. She was a new person to the Church and is Apostle Freddy's personal assistant and speaks Spanish and English as well as French. It was funny at times beacue I don't have the purest English accent!

My real burden is that people who are coming to Christ or already in Christ should be 'free'. I get angry with the devil when I see some of the ways God's people are screwed up. After speaking for about an hour or more I began to minister in a more prophetic way. This can take many forms but this time God opened up the people for ministry by showing me by the word of knowledge what people needed to have release from.

I had a sense of someone who at 13 years old was abused. I sensed also that they had been locked up in a dark room or cupboard many times as punishment. There were other things said but this was the main area. I asked for those who wanted me to agree with them in prayer to come forward and about 10 to 15 people responded. As I prayed many people showed signs of deliverance and release. Some people manifest some sort of fight to be free and others don't but that is irrelevent. If God is at work He does it as He wants it done.

Another thing God asked me to do was to release a greater anointing on those who were intercessors. The Prophet gift is linked to intercession. Both a Prophet and an Intercessor have a 'seer' spirit. They see what God wants to have done. So I called those who wanted to be anointed with greater power or to be used in this gift for the first time to come forward. Many people did, maybe twenty or more. What happened next was incredible. The Spirit of God fell and many were mightily impacted with His power. It was a special moment when God just poured out from heaven a special act of His grace. One young man who had confessed some sexual sin to me was delivered of a demonic spirit as we enjoyed this heavenly outpouring. Another woman began to travail in intercession, it was loud but the amusing bit was she was eight months pregnant and sounded as she was giving birth.

As they prayed for me at the end I too was floored by the Holy Spirit and was really blessed by the words of promise spoken over me.

Honfleur was special. I was tretaed with great respect and honour and loved the people there. They are truly the people of God.

I had a special time with a couple who accommodated me in their beautiful home. It is a typical Normandy cottage with thatch roof and oak beams. Their baby cat took a special interest in me even coming and sleeping on my shoulder for about an hour. So if ever you are in Normandy this is one place the try. They run a bed and breakfast business so let me know and I'll put you in touch. 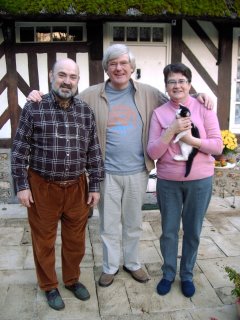 For all those who prayed, your prayers were answered.
Posted by Poverty to Prophet at Friday, November 17, 2006

Sounds absolutely fantastic, but I have been looking very carefully at the first pic on this blog.